Ondolon is a real-time acoustic signal processing tool for transforming natural or musical instruments sounds into invented sounds. Developed since 2011 by Charles-Edouard Platel, his concepts have since been at the source of several of his works. He now uses Ondolon for all his work of sound sculpture to produce concrete music creations.

For example, in "Very Far Very Close", Tibetan singing boils are harmonized and orchestrated while letting their sub-harmonic resonances vibrate synchronously. At the beginning of "Forest vibes " , we can also hear baritone saxophone modulations that are multiplied in tessitura and velocity, making us hear through the magnification of reed vibrations as an accelerated perception of the biological tremors of thousands of trees. Later on, for the musical suites Migration, Vibration and Sands, most of the rhythms and sound colors result from an instrumental playing accomplished on Ondolon.

This software is a prototype, designed for experimental music . It is distributed as a free product, but any commercial use is forbidden. The author gives it as an open source software that may be changed or improved by users. It is based upon the Max/MSP/Jitter engine, primarily designed at IRCAM and currently distributed by Cycling 74.

Download of the Ondolon application and documentation (version 4, needs Max/MSP/JItter from Cycling '74):

Turn on the sound of your computer and watch the demonstration video (18'54 ): 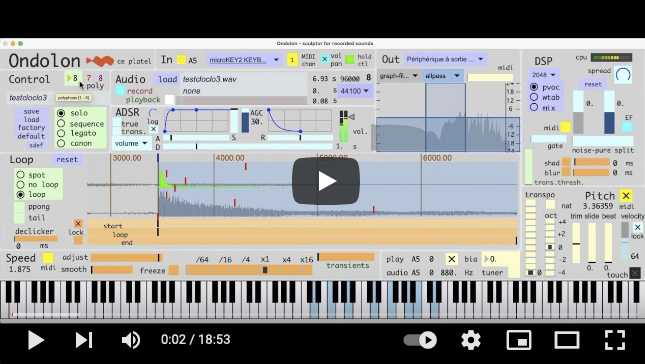 The first idea of Ondolon is to be able to exploit a sound extract in the manner of a film plan::

The second idea is to allow a polyphonic playing that keeps the different voices in phase in order to respect the articulations of the sound.

The notion of instrument is essential: all settings, in a single window, can be modified in real time during the performance, according to the musician's feedback. His actions can be memorized over time so that the work session can be replayed identically. Technological artifacts are not new, but the aim is to exploit them with ease to serve an aesthetic purpose.

How does it work?

The Ondolon looks like a polyphonic sampler driven by MIDI, with specific signal processing functions:

The user operates a sound recording in the manner of a video plan. When listening, he chooses a favourable zone to exploit, according to different choices of looping modes, speed, height and texture. Then it can play this zone from an external MIDI keyboard or the on-screen keyboard, while changing the previous settings with the mouse. The audio output can be routed to other software or simply recorded in an audio file.

Depending on the nature of the original sound and the settings applied, Ondolon's digital signal processing stretches or compresses the phases to provide the required result. This can produce both aesthetically stunning sound phenomena as well as unwelcome acoustic aberrations, especially in stereo.  Thanks to the real-time settings, Ondolon allows you to experiment with one or more interesting game configurations.

The work is reusable: