Randolon is a software instrument developed since 2010  by Charles-Edouard Platel to give rhythm to his compositions: for example the dynamism of "the Cycle of Life" in the "Acousmatic Transmutations", the natural fluctuations in the thirteen "Anachronistic Poems " , the baffling ballet of the "Persisting Objects" or the flows of clinking sounds in "Very Far Very Close". The instrumental music for the video "Badinage for four hands" was composed entirely by Randolon.

This software is a prototype, designed for experimental music . It is distributed as a free product, but any commercial use is forbidden. The author gives it as an open source software that may be changed or improved by users. It is based upon the Max/MSP/Jitter engine, primarily designed at IRCAM and currently distributed by Cycling 74.

Download of the Randolon application and documentation (version 2, needs Max/MSP from Cycling '74): 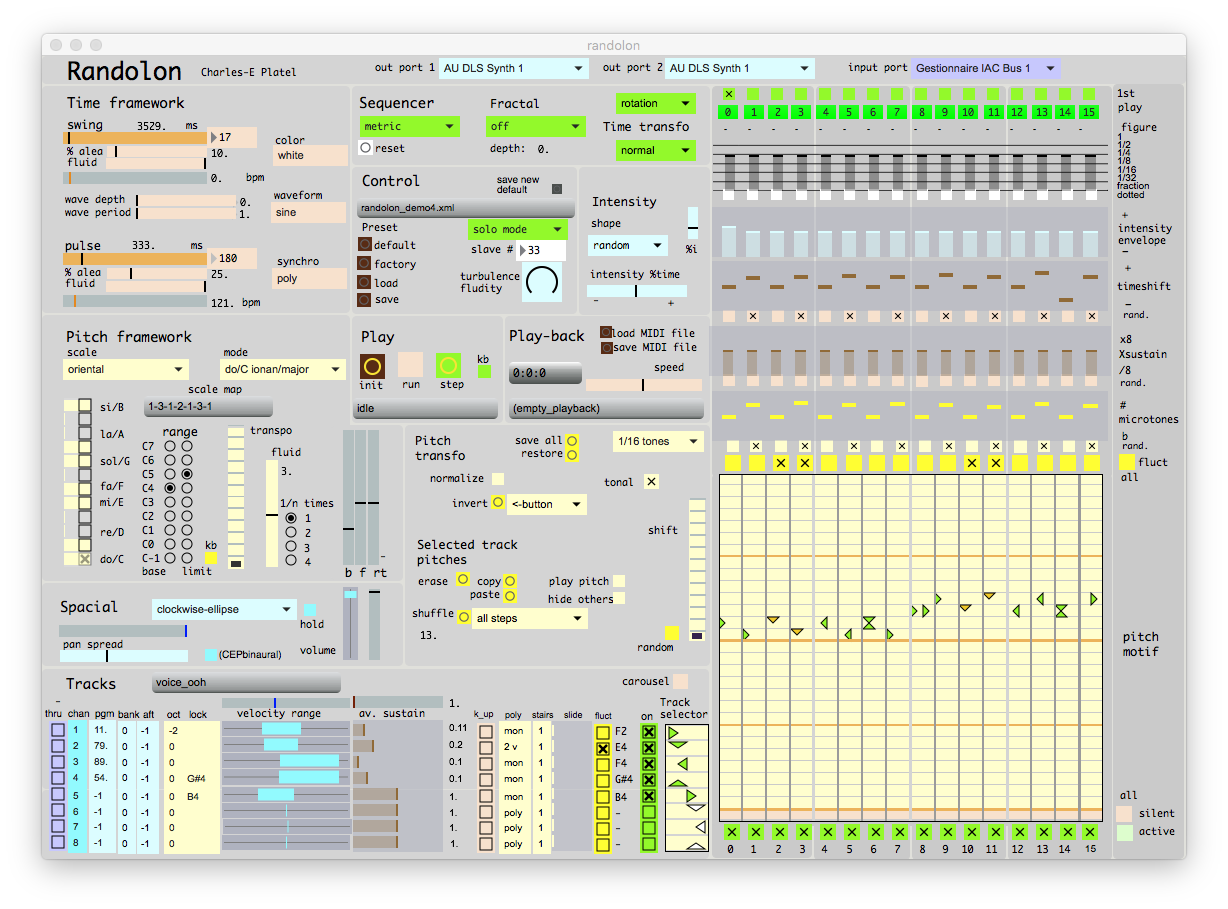 The idea of designing Randolon came from a need to master the composition of music not based on regularity of rhythm. The reflection behind this need is presented in this article: Anachronistic music.

The part 1 of the book "Imaginary Music" presents a sound analysis baseline operating on three dimensions: duration, presence and color.
The chapter 5 proposes to listen to the sound objects by reference to these three dimensions and, by analogy to the visual world, to identify continuous, quantized, fractal or random forms and their combinations. In return, this taxonomy can be useful to describe aesthetic intentions about the sounds and so compose musics.

To compose electro-acoustic pieces on a computer, musicians often rely on an off-the-shelves audio production software, like Pro Tools (Avid), Live (Ableton), Logic Pro (Apple), Cubase (Steinberg), Reason (Propellerhead), etc. . Addressing various users, these tools (DAW: Digital Audio Workstation) principally provide technical features to work on the audio signal: signal synthesis and processing, multitrack arrangement. Definitely, the practical fulfllment of a musical work still consists to cut and stick virtual equivalents of the former times magnetic tape rolls, of course faster and without getting one's fingers mixed up with the adhesive tape. The comfort and the accuracy is much improved, but the methodologic leap is short, the work remaining laborious to stay far from the standardized  models. For example: to put on an audio track some dozens of sound objects in an artistically irregular way is tedious and delicate to succeed.

The second idea is, rather than to delegate the inspiration to a sophisticated but impersonal algorithmic tool, to make the musician constantly drive the parameters according to his feeling, in feedback. All the controls can be operated within the same window. The purpose is definitely an instrumental approach, and not to make music from robots.

The third idea is to continue to base on a standard production software to make the sounds and to perform the tracks arrangement, in deriving the technical parameters from a musical parameters mapping, thanks to scaling previously defined by the Randolon user.

Most audio production software provide features to control their virtual synthesizers (samplers, modellers, vocoders, etc. ) through a MIDI control flow, typically sent by connected keyboards and sequencers. Randolon takes the place of a sequencer to produce a flow of controls towards MIDI channels, each one being dedicated to a virtual synthesizer and an arrangement track. So the sound objects making remains ar the level of  the efficient audio functions provided by the production software and its plugins, while the arrangement of the objects across space and time is driven from Randolon.

To summarize, Randolon is a sequencer which organizes itself on the basis of aesthetic decisions sent at any time by the musician user.

Randolon is used by its designer to manage moments of creative spontaneity freed from its technical achievement, by implementing aesthetic schemes being simple to express but which otherwise would lead to a very harder and more complex digital audio work.

Randolon may also be used alone, as controller of an external or internal synthesizer, like a real-time sequencer for live music.

The principles rely on the duration/presence/color baseline. According to the musical project, Randolon enables to specifically organize the framework of these three dimensions to design sound objects, which are generated by a MIDI flow sent to instruments.

Randolon relies on a recitative time progress, i.e. a sequence stream (analog to the verses of a poem) made of steps (analog to syllables).  Two rhythmic levels result from this:

The classical bar is not managed by Randolon, because it addresses only the specific case where, the sequence being contiguous, the pulse comes down to proportional fractions of the swing.

The musician works in real-time on the sound pattern settings. A setting includes a repeatable framework and automatic variation ranges of the parameters inside this framework.
The variations are from four types:

Randolon may also be simply used as a basic sequencer in disabling all automatic variation settings, or, without enabling any sequence cycle, as a random music generator.