This page tries to answer with simplicity to questions of listeners who discover the computer-made electro-acoustic music, for example when listening to my musical pieces.

ABSTRACT: The electroacoustic musician uses the computer to create sounds and arrange them into musical compositions.

The adjective "electroacoustic" is originally used to describe the technology of electroacoustic loudspeakers, whose vibrations come from electronic equipment. The acoustic front side displays proud round speakers like stars, and on the electro back side, the more or less concealed electric cables crawl gently towards the ground.

What does electroacoustic music mean? Is it the music of the "electro" genre, with big amps, infernal rhythm machines and earplugs at the entrance of the concerts?  What does this have to do with "acoustic"music, which concerns all the diversity of music whose sound vibrations originate from the human voice and wind, strings and percussions instruments. Moreover, the frontier is not always obvious, for example when the acoustic instrument is equipped with a microphone for amplified diffusion and electronic effects. One then refers to the aesthetic intention: to electronically work the sound for itself or to enhance the instrument or the performer.

Acousmatic music offers an attitude of listening to sounds for themselves, without looking for the cause in terms of instruments, voices or recorded noises. The listener is like in cinema, concentrated on the present moment of a scene in a fictional spatio-temporal universe, here carried by the sound, that is, in concrete terms, vibrations. 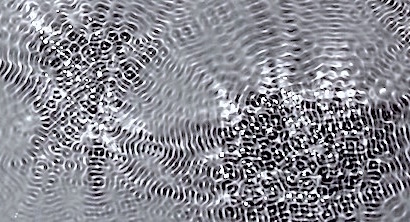 Image on the left: vizualization of acoustic vibrations in water (exhibition "Vibration", 2016)

The term "acousmatic" was used by the philosopher Pythagoras to describe a teaching he gave hidden from his disciples by a curtain, so that they would concentrate only on his words and not on his person and gestures. Closer to us, the use of telephones or radio leads to comparable types of listening.

Acousmatic pieces of music are thus designed to be listened to only through an electroacoustic chambers system or possibly headphones. The listener is not visually or audibly connected to performers playing musical instruments. The word "chamber" means "interior space". This is our program: to make the interior spaces resonate, the spaces that we do not see but that can touch us.

The acoustic chambers have the mission of musical instruments, which consists in radiating the vibrations of the sounds sought by the musician. The excellence of the "sound projection" system is crucial for the rendering of all the subtleties of the composition, which often includes a spatial perspective, suggesting a virtual landscape and trajectories. Acousmatic sound diffusion is therefore a demanding art, with its lutherie, its techniques and its experts.

Rather than the abstract notions of notes, melodies, chords, etc., we use a more direct term for the listener: the sound object: a sound or noise that is objectively distinguishable and then recognizable by a listener. Sound objects can then be composed together to produce a musical work of aesthetic value. This concept stems from the opening of the music field to sound recording in the field: sounds of nature, city or human activity, listened to and processed as ingredients for concrete music. It can also provide an interesting insight into the whole range of human sound arts, including classical instrumental and vocal music.

This new way of looking at music could only have appeared in the twentieth century, since the invention of devices for recording sounds in order to re-listen to them later: objectively memorizing sound on a hardware medium was previously unthinkable for musicians. A more recent invention, the digital sound signal processing, makes it possible to instantly control the texture of sound independently of the time arrow: it is today a field of unprecedented musical possibilities, in the midst of exploration.

Another field of sound objects has also been opened up, that of synthetic sounds, invented thanks to various electronic synthesizer technologies, and now by computer.

Like movie films, acoustic musical pieces are made in the studio to be finally fixed on a support used for the projection in a place where the listeners are welcomed. In the early days of this music, the pionneers (for instance Pierre Schaeffer, Pierre Henry, Karlheinz Stockausen, Bernard Parmeggiani, François Bayle, Luciano Berio, Luc Ferrari…) used tape recorder tapes. Today we use computer digital files, CDs or DVDs.

Some electroacoustic artists rather like to perform live during the concert. They then bring studio equipment on stage and compose or perform live in front of the audience in a more or less theatrical way.

The composer can also associate a score for instrumentalists or vocalists with a recorded electroacoustic part. This is called mixed music.

3. What does the computer do?

Thanks to specialized software, the computer is used as an instrument for sound sculpture, either by direct synthesis of acoustic waveforms or, through digital "shaping", by working with materials obtained by recording musical instruments or concrete sounds from nature and human activity. These acoustic signal processings are similar to the treatment of pigments and colours by painters or image processing by graphic designers and digital photographers.

Technically, the computer calculates digital signals (i. e., coded saquences of numbers) that are sent to a digital/analog conversion electronics (located on a "sound card"). This generates electrical audio signals for the power amplifiers sending current to the speakers.

The computer also helps arrange multiple sounds together and over time to produce a musical work. It allows you to draw overlays and sequences of selected sounds while listening to the result. He replaces the traditional score with a sound program that can be repeated and modified by the composer until he is satisfied. Further still, some software programs propose structures for the composition itself, based on academic rules, the imitation of classical, popular or proven commercial standards, or, let's prefer it, new sound forms and textures, imagined by the artist, but too difficult to calculate by hand. Iannis Xénakis or Jean-Claude Risset are pioneers in this research.

Allow a personal point of view: the musical result must be intelligible to the listener, even if composing acoustic music is technically complicated and often in the forefront of aesthetics. This limpidity is the thread running through the essay "Musique Imaginaire", written as and when I was a listener and musician. It is also the remark of people discovering this type of listening, who can then share a new way of hearing and being moved by music.