Dun Aonghasa, or ' Fort of Angus ", is the name of a stunning Irish prehistoric site, built on the higher spot of Inishmore, one of the three Isles of Aran, between the cliffs of Moher and the mounts of Connemara. Built at the Iron Age on the edge of an approximately 100 metre high cliff which moved back under the assaults of the Atlantic Ocean, it consists in three half-ringed walls, an outside setting up of vertical stones in "chevaux-de-frise", and a mysterious rectangular central stab in front of the sea.
The musical work evokes contrasted impressions: the hieratic presence of the fortifications in the crystal clear Irish light, the line of cliff winding, as far as the eye can see, between the foaming sea and the green meadow, the piles of defensive blocks which go on by the networks of low dry stone walls, then to the peaceful houses and pubs where beer and music flow, the echos of the  tumults of the ancient ritual or warlike gatherings, and finally the total and vertiginous vision of the course of time which, by slices of cliff, chops the site since 3000 years. 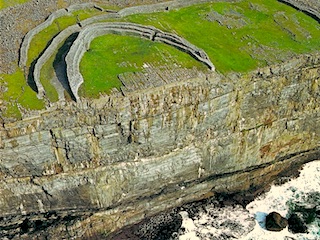 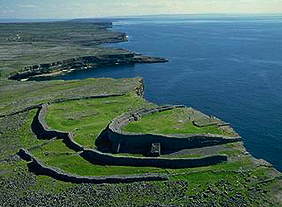