Sound evocation of the first pages of the Jules Verne's novel "20,000 leagues under the sea".

As for much of young readers, my initiation with the extraordinary voyages of Jules Verne started with 20,000 leagues under the seas, and this first palpitating sentence: "the year 1866 was remembered by an odd event, an unexplained and unexplainable phenomenon that nobody undoubtedly forgot"..
Thus the piece begins with the hunting carried out by the commander Farragut and his steamship "Abraham Lincoln" and the appearance of "the thing" in front of Ned Land the harpooner. Then dazzling evolutions of this "Electric Narval", the shock against the boarding in middle of the night, Professor Arronax's toggling over to sea, and his amazement to be carried with his two companions on a phenomenal object, but of hand of man.
He will discover then the interior of the formidable machine, the unlimited force of the electricity which gives its power to the propeller... then we will go back to 2005 through a small hole of light.

"Electric narval" was created as contribution for the 2005 IMEB festival "Open Work", on the theme " Future worlds, automats and machines to project oneself there ".

See also : Twenty Thousand Leagues Under the Sea, by Wikimedia 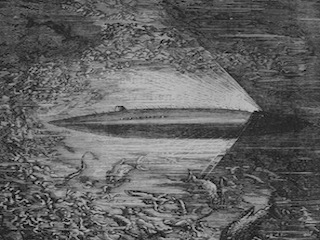 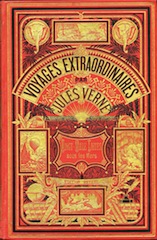