OVER THE CITY - Rumor (excerpt)

OVER THE CITY - Inside the factory (excerpt)

OVER THE CITY - at an inhabitant's (excerpt)

OVER THE CITY - At the market (excerpt)

OVER THE CITY - Conviviality (excerpt)

Sound textures to wander over the dream small town woven by Cécile Dachary. 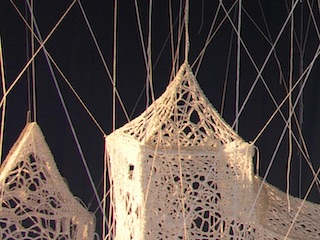 Scene 1- rumor: when approaching toward the town, the indistinct rumor progressively becomes more detailed, such as sounds of the street and of passers-by.

Scene 2 - inside the factory: a polyphony of machines in continuous or repetitive processes.

Scene 3 - at an inhabitant's: attracted by notes from a piano, we introduce into the home of a collector of sound objects.

Scene 4 - at the market: the stallholders' shouts, like choruses in the music.

Scene 5 - conviviality: around the bridge: cafés, restaurants and street musics.

"Over the city" was played in a loop in public premiere at the Cécile Dachary's exhibition during the Hélium artistic course in the vallée de Cheveuse, in November 2012.

"Over the city, portrait of a dream small town" was played on the MOTUS acousmonium by Guillaume Contré at festival Futura 2013 in Crest.